The Statue of Dante Alighieri, in Piazza Santa Croce, was sculpted by Enrico Pazzi, 1865.

We have decided to leave for Venice to-day, and so we made a farewell call on Mrs. Spears at her hotel, took lunch at 12:30, and train at 2:45. The facchino put us all into one compartment, and we thought that we were settled for good until we came to Bologna, when we discovered that the cars were to be detached from the train, and we had quite a scramble to get our baggage out and in to the Venice Train.

We had a fine view of the valleys and ravines of the Apennines and of the rich plains of Tuscany. The vegetation seemed much more advanced, and the green fields with the vines planted at stated distances were very restful to the eye.

We passed through at least thirty tunnels, the train gradually creeping up and down a mountain. I had written to Mrs. Conte that I would put a handkerchief around my umbrella, and so her son easily recognized me and took us to a Gondola. 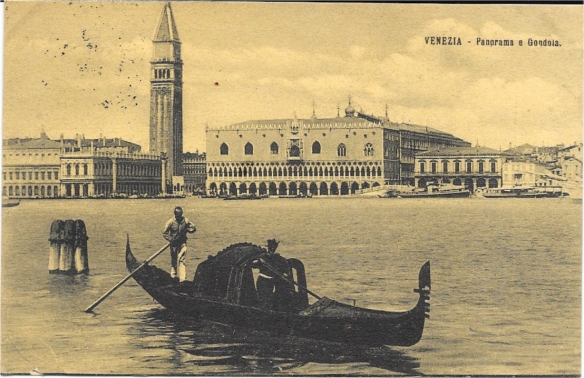 Panorama of Venice with a gondola.

Crossing the Grand Canal, we entered a smaller one and landed right in front of the house! It costs only 1 cent to be ferried across the Canal to where we can reach St. Marcs in a few minutes. We are right around the corner from Salviati.

We were shown into a large chamber, stone (cement) floor. The building is an old patrician residence with the coat of arms over the door and a good view of the quaint old houses with their tile roofs. We slept fine and were ready to go at 10 o’clock in the morning of  [Editor’s note: text ends here].