This is “Himmelfahrt Christi” and a big holiday here, no one working and most of the stores closed. They are big and I believe they have 22 of them in the year. We went to “High Mass” at the Frauen Kirche and the music was grand—mixed choir, string band and the big organ combined to make a music which reached from the immense vaulted ceilings and sometimes the grand church seemed filled with music.

Most of the worshippers come in, stand around, say their prayers and go out again, it is a constant going and coming. As it was very cold in the church we left early and attended “High Mass” in the Basilica of St. Boniface. This is an admirable imitation of an early Christian Italian basilica of the fifth century. It was completed in 1850 and has some 60 columns of gray Tyrolese marble, open timbre roof with gilded beams. There are some very fine frescoes and 35 medallion portraits of the popes.

We could enjoy the music here because we found a nice sunny spot and a good seat. The folks went home, and I took a look at the Justiz Palast (Courts of Justice) and I could not help making a comparison with our Four Courts. This is an imposing building in baroque style of architecture with an immense central hall with a high dome of glass, beautiful iron doors with art glass the scrolls being made not by using lead, but by inch-wide iron.

Upon my return to the hotel, we all went to the Rathaus Hof (Courtyard) where we enjoyed the music made by a Regimental Band. They played Schuman’s “Ave Maria,” and I shall never forget it.

We followed this up with a good dinner in the Rathaus Keller and on our way home we saw a Schaum Torte in a confectioner’s window. I could not resist the temptation of buying some for our supper, and I was not disappointed in my anticipation of enjoyment of this, my favorite pastry of my youthful days.

I went over to take a look at St. Paul’s a new church with very pretty modern Art Glass windows. At the Loewen brau, where we went to hear a band play, we met one of our Barbarossa fellow passengers, a Prof. Goulding from Ann Arbor, Mich., and we were glad to meet again and exchange our traveling experiences. 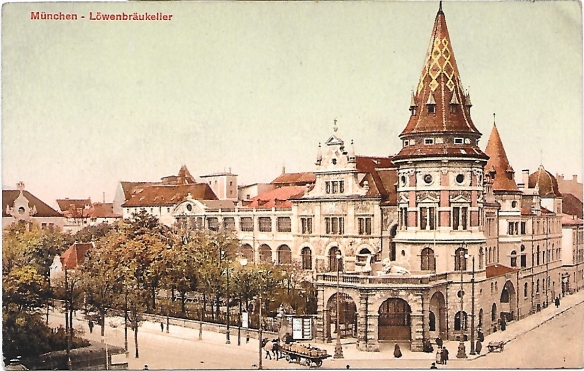