I am writing this in Remismuhle in Tante Lenchen’s new home in a beautiful quiet spot, a regular “Home,” after a long time of wandering.

This is a fine old university town with some 17000 inhabitants picturesquely situated on a ridge on the river Neckar. The university is quite old for it was founded in 1477 and enjoys a high reputation on account of the theological and medical faculties. Philip Melanchton, the co-laborer of Luther, was a lecturer here in 1512 to 18 before he was summoned to Wittenberg.

From our window, we have a fine view of the old Schloss “Hohen Tübingen” situated on a hill commanding the town and which was erected in 1535. We took a walk along the Neckar to the house of Professor Christ of Paulus who was my teacher in the Salon 44 years ago and whose wife was my school mate. 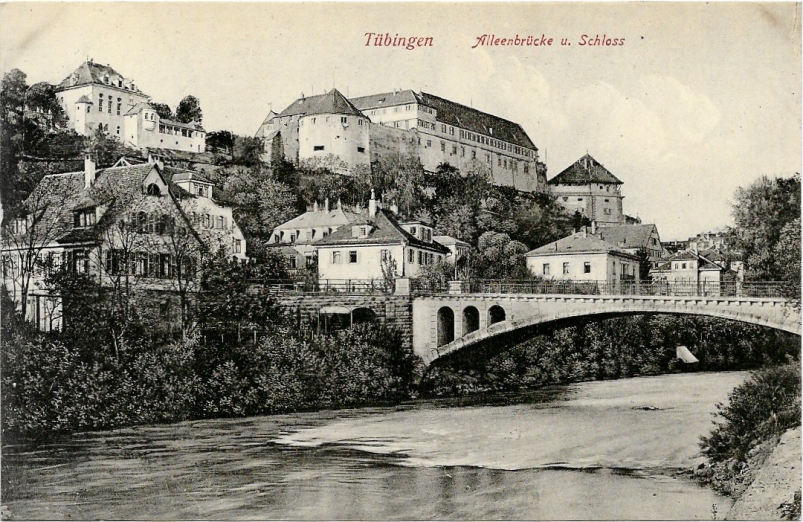 Unfortunately, they are off on their vacation, but I phoned to Dr. Immanuel Paulus who is pastor of the church in Kilchberg near Tübingen who is another of the Salon teachers, and he told me that he would come in to see me at 3 o’clock.

We went to look at the old Stifts Kirche of St. George, which was built in 1483 to 1529. For the first time, I saw circle windows, which, in place of the usual rose effect scroll work, have figures carved in stone such as St. George, Mary, etc., with stained glass surrounding them. I also saw some very fine and well preserved old stained glass windows.

On twelve sarcophagi are the recumbent stone figures of Wurtemberg princes, including the much beloved Count Eberhard in Bart who died in 1496. The Choir stalls in carved wood below the organ are from the 16th century and a wonderful work of Art.

We took a walk through the promenade, along a pretty lake on which we saw a black swan and back to our fine old hotel where we enjoyed an excellent dinner. 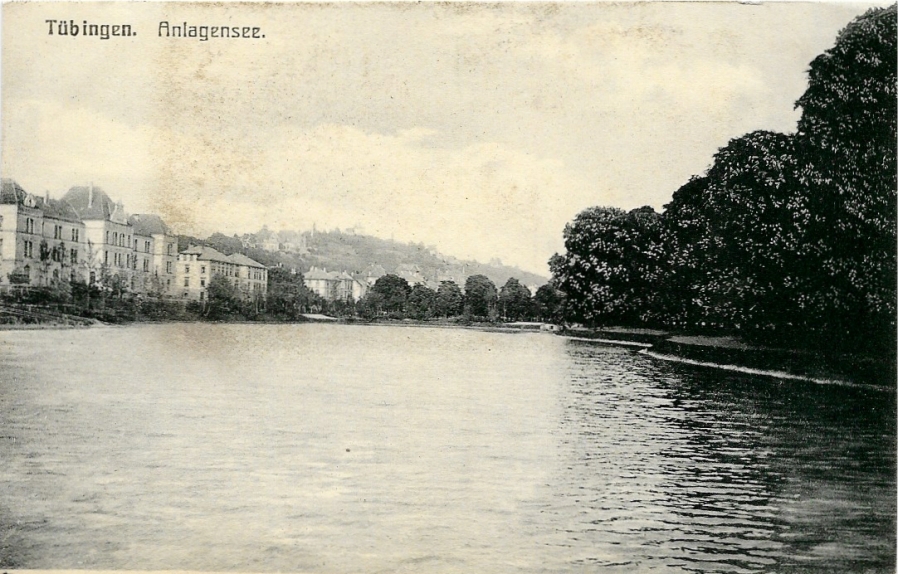 Dr. Paulus showed up punctually at 2:30, and we had a cup of coffee in our room with a good chat of old times.

He was a student here 50 years ago and kindly offered to take us around. So we walked along the old Aula and through narrow streets up to the Schloss. Passing through a richly decorated outer portal erected in 1606 and an inner portal erected in 1538, we entered the old court in which there is a well which is fed from a mountain spring. 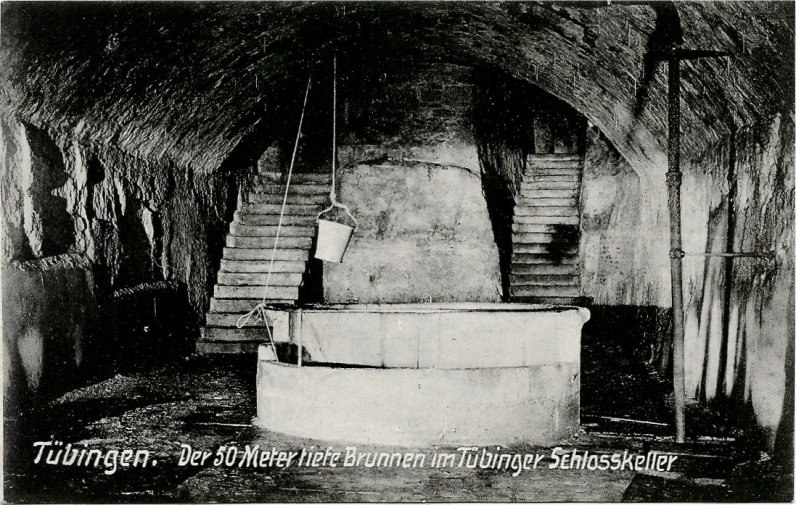 Tübingen.
The 50-meter-deep wells in the Tübingen castle cellar.

Emily and I descended into the deep cellars where we were shown the dungeons and another well which was dug down to the level of the Neckar in order that, when the enemy cut off the supply of the mountain spring well, the occupants of the castle would have water.

We were also shown an immense cask which holds 18700 gallons, but it is empty. The walls seem to be from 4 to 6 feet wide, and I was told that it took 6 years to build the castle.

Tübingen.
The big barrel in the castle cellar in Tübingen.

Through winding passages and across the old drawbridge up a hill, we climbed to the Schanzle, a view point back of the Schloss, and, for an hour, we sat and enjoyed the beautiful view of the Neckar Valley and the distant mountains.

Returning we peeped into the windows of the well preserved buildings forming the Schloss, which contain the University Library. Upon entering the hotel, Dr. Paulus discovered that it was too late for his train, so he said he would walk home as it was only about an hour’s walk, which I consider a pretty good bit for a man of 70 years. But that’s nothing for a German lover of nature.

Tübingen.
Along the Neckar.