We awoke and, as usual, our first step led us to the window to see about the weather. The sky was not clear, but we decided to take a trip on the lake to enjoy the fresh air and the scenery as far as it was visible to us.

We started at 9:30 in the morning. Beyond the Meggenhorn, the bay of Kussnacht opens to our left and that of Stausstad to our right, forming the cross of the lake. We could see Kussnacht in the distance and, on our right, the wooded mountain, Burgenstock. From this part of the lake which is the center of the cross, the Pilatus is very striking, its weird peaks, [illegible], free from clouds, form a marked contrast to the Rigi opposite, the lower slopes of which are covered with gardens, fruit trees, and houses, and the upper with woods and pastures.

At 11:50, we reached Vitsnau and Aunt Lenchen ran a race to the car to secure a good seat for us. We had decided that she and Mama had best stay in Vitsnau while Emily and I ascended the Rigi.

The mountain railway, which ascends from here, is run on the rack and pinion system with a cog wheel arrangement in the center of the track. We ascended 4470 feet in about an hour and fifteen minutes. The Rigi, on this side, consists chiefly of conglomerate, a formation of pebble stones and grit, which looks as if the pebble stones had been put together with cement. We had a good view of this peculiar formation in the defiles which had been cut out for the road.

We ascended gradually over broad terraces and gentle slopes covered with pastures which support some 4000 head of cattle and planted below with fig, chestnut and almond trees. Owing to its isolation, the Rigi commands a panorama 400 miles in circumference unsurpassed for beauty in Switzerland. We passed Rigi at a height of 4720 feet, [text missing], which has a large Kurhaus with covered promenades and is situated on a sheltered plateau.

As the train gradually ascended, we had a good view of the lake, which became grander the higher we rose. At Rigi Kulm, we had reached a height of 5905 feet, and we were in the clouds. Nevertheless, we climbed up to the hotel and to the view point beyond it.

Here it descends abruptly to the Lake of Zug. The mists forming into clouds completely shrouded the Kulm, but even the mists possessed a certain charm surging in the depths of the valleys and struggling against the rays of the sun.

We could not stay over night to watch the glorious sunrise, so we took the next train down and were received by our loved ones with the welcome news that they had laid in a supply of buns, cheese, butter, pears, fresh figs, and that everything was ready for a lunch, which we enjoyed very much.

We took a boat for Brunnen at 2 o’clock crossing and recrossing the lake, making a landing at pretty little villages all filled with modern hotels. We had a good opportunity to see the lake in all its beauty. At Treib, we saw a storehouse (Susthaus), in the ancient Swiss style, now used as an inn.

Brunnen and the Mythen [mountains].

On the terrace in front of a grand hotel, now almost desolated, we took our coffee and waited for the next boat to take us home. On our way home, we had another opportunity to admire the lake and the surrounding mountains, and we saw the sun breaking through the clouds giving a farewell glance to the hotel perched high up upon the Rigi.

Lucerne loomed up in the distance with its watch towers and spires. The Museum of Peace and War, a picturesque timber building in the medieval castellated style, situated near to the steamboat landing, came into full view, near to it the pretty R. R. station, the post office, and the large hotel buildings. Another day has passed, and we are glad to get to our hotel and to our beds. 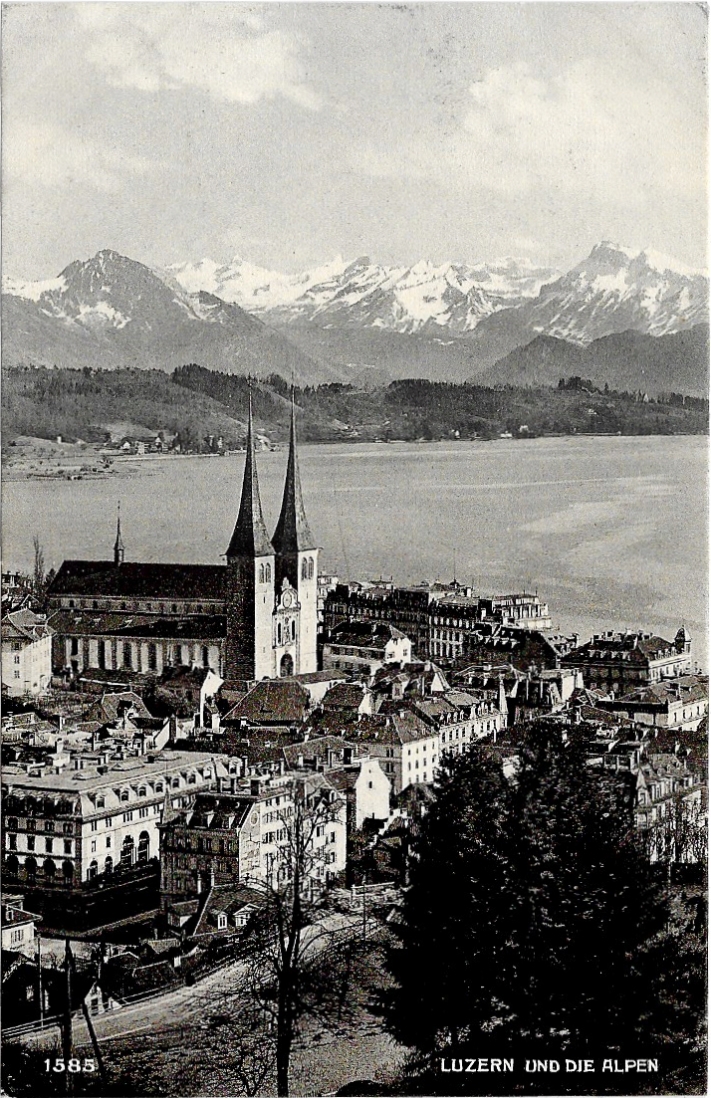 Lucerne and the Alps.