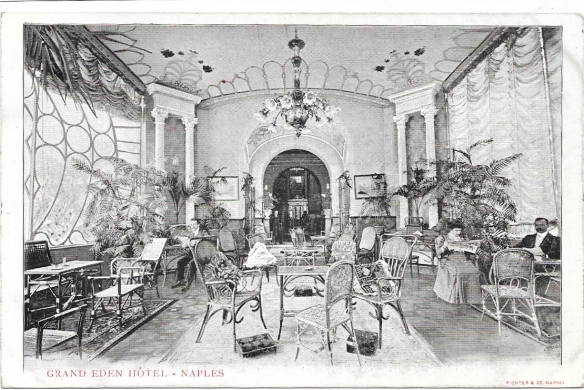 We awoke at 8 o’clock and took our time to dress. After breakfast (which consists of very hard crusted buns, honey, or preserves and a cup of coffee or chocolate), we sat out in the garden, and, at 10:30 o’clock, I went on a tour of investigation by my “Lonely self.”

I took the car to the Plaza, which has the statue of Nicola Amore, the man with the open hand who must have taught the Italians the habit of asking for tips.

I then went to the Cathedral Duomo, which has innumerable altars, but they look dirty and dingy. It is a large structure. There are no seats, but chairs are provided by ushers as the people come in. 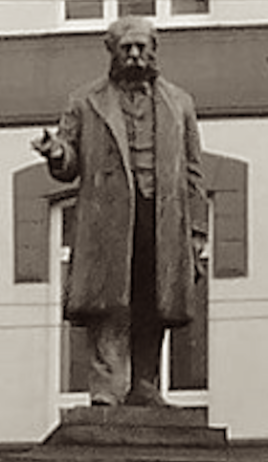 From here, I walked back towards the hotel, passed another statue erected in honor of Ruggero Bonchi (whosoever he may have been). He has the outstretched arm with the open hand, so there must have been more than one of these tip, tip, tip teachers.

On the Corso Umberto, I passed the University, a large building occupying almost a block, also the Chamber of Commerce. The streets were filled with people, and fakirs of all kinds plied their avocation. Wheels of fortune, magicians, sellers of lemonade, nuts, fruits, etc.

The Old Barracks, in front of which lounged soldiers, some of whom wear round hats with a big bunch of Rooster feathers on top, and the City Hall are on a Palazzo, on which is also the statue of Victor Emanuel II.

I next went into the Basilica of Francesca de Paulo on the Plazza del Plebicito, which is an immense building with a dome flanked on each side by colonnades with columns of 6 feet diameter. There was a service in front of one of the altars of which there are several. The side of the walls had heroic-sized statues of St. Augustine and other saints.

I passed the church of S. Lucia when they were taking in a baby to be baptized, I suppose, but I had no time to stay, so I went by without entering.

Here I took the car passing the Hassler Hotel, where you stopped last year. Our hotel is up the hill, passing Cooks. The people look well in their Sunday dresses; the children of the richer class being dressed especially fine and very pretty and sometimes very odd.

After lunch, we hired on of these cute little cabriolets with room for three and drove to Posilipo and the Cape of Psilipo from where we had a fine view of the Isle of Procida, with the prison which is properly named “Castello Misero”

On the way we passed a Greek Temple which must be very old. We passed along the Villa Nationale (Public Park) which has the Aquarium in it.

Driving along the Via Caracciolo, we had a fine view of Naples, with the Castello Martino on the hill and Castello Dell’Oro built out into the Mare Tirreno (Mediterranean Sea).

We passed many carriages and pedestrians, as this seems to be a favorite drive, and the view from the Rotunda at the end of the drive is grand. There are many villas of rich Neapolitans on the road with beautiful gardens.

We returned in time for dinner at 7:30, and, after that, Emily and I sat up and wrote twenty-one postal cards and retired at 11 o’clock.

Editor’s note: Photo of Bonchi courtesy of HombreDHojalata and Wikimedia.