This morning we arose in good time with the determination to see something of this city, and we started down from our mountain on the carriage road, while usually we go down a road which winds in the zig zag through the hotel garden.

We passed the St. Nicolaus Church and went in to take a look at it. It has modern windows, no doubt by the Tyrolese Glass Painting Co. It is a pretty modern gothic edifice with the outside front wall covered with mosaics.

The little cemetery behind the church attracted our attention and we went in to look at it. It has the graves very close to each other and is surrounded by covered porticos under which the bodies are buried, and, on the back walls, of which the memorial tablets and oil paintings are placed. The crosses made of wood, some of iron, some of marble are small and very neat and before each one of them is a little bed of flowers making in its entirety a very pretty picture. 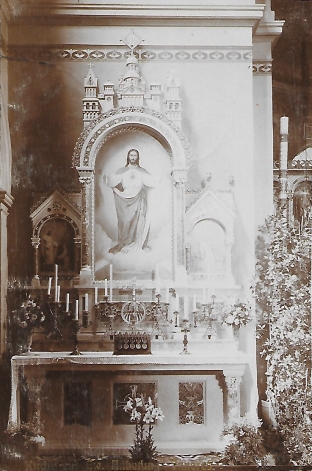 We crossed the little foot bridge and, going along the Chotek Allee lined with pretty residences, we stepped into the Kirche zur ewigen Anbetung, where we found some very fine pictures, one especially above the altar has a fine figure of Christ, also good mosaics, but the Church is so dark that you do not get a good view of them.

We next went into the Kunst and Gewerbe Austellung, where different stores of Innsbruck exhibit their wares and we bought some Tyrolean wares.

On the Margavethen platz, we admired the Rudolfsbrunnen commemorating the 500th anniversary of the Union of Tyrol with Austria. I took a look at the Landhaus and admired in the Landtagasaal some pretty frescoest [sic] windows.

The Anna Saule, erected in 1706, commemorates the evacuation of Tyrol by the Bavarians and French in 1703. The Triumphal Arch, erected in 1765, is a fine piece of architecture.

We now went into the older part of Innsbruck, where we saw some very old houses curiously decorated on the outside, old, too, one of them the “Trautson” house, built in 1541, has very curious coat of arm and ornaments. The prettiest one is part of a palace built in 1500. It has a gilded copper roof, covering a balcony, and it is called the “Goldenes Dachl.” It is covered with some 3400 gilded plates. The ornament of the first balcony consists of graceful coat of arms, the second shows in relief dancers, besides this there are frescoes on the gable.

We also saw the Giants House, this was built in 1490 and given by the Grand Duke Sigismund to his court giant. A statue represents this giant. We closed the morning with the Hof-Kirche (Franciscan) erected in 1552 in compliance with the “Will of Emp. Maximilian I” (who died in 1519) for the purpose of worthily enshrining his monument. This occupies the center nave. The Emp. is represented in a kneeling picture (in bronze) on a massive marble sarcophagus, surrounded by 28 large bronze statues of his contemporaries and ancestors in the guise of torch bearers and mourners.

Among these the figures of King Arthur of England and Thodorich King of the Goths, are particularly fine and attributed to the famous Peter Vischer of Nuremberg. On the sides of the Sarcoph. are twenty four (24) reliefs in marble representing principal events in the emperor’s life. It is enclosed by a graceful iron guard with gilt leaves and coat of arms.

The Princes Pews is a fine old piece of work in wood. Andreas Hofer, the liberator of Tyrol from the misrule of the French in 1809, is buried in this church and has a monument with his statue.

We had a good dinner when we reached home and started out again at 3 o’clock and took a look at the old town. We went into the Goethe Stube [room] in the “Goldmen Adler.” In this old hotel, Emperors and Kings stopped, so did Goethe and Heine, and Andreas Hofer made from a window a speech in which he accepted the leadership. He was shot by the French and buried in Mantova.