We arrived early this morning and were welcomed in the breakfast room by Aunt Kinski. She took us to the Stephens Kirche or Cathedral, the most important edifice in Vienna. 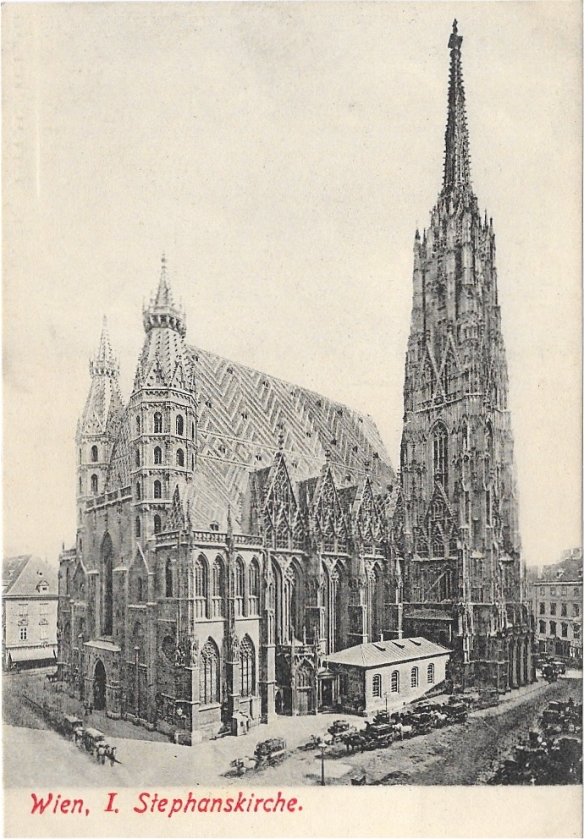 The west facade with the beautiful Riesenter (or Giants door) was erected in 1230 in the old Romanesque style. Other parts and the south tower, which is 448 feet high, as well as the unfinished north tower were added in 1359 and 1450, each taking about 60 years to be built. The entire building is covered with fine sculpture and looks grand. The interior is very gloomy, the nave is almost 100 feet high, and the vaulting is borne by 18 massive pillars, adorned with upwards of 100 statues. Numerous altars enhance the picturesque appearance of the interior.

The late gothic pulpit has the statues of four fathers of the church, and, under the stairs, the figure of the Master looking through a window. There are a few 14th century memorial windows, but the majority are modern and contain very fine figures. In several of them, the figure or bust picture of the departed one is introduced.

In front of the steps to the vestry is a stone which closes the entrance to the old burial vault of the sovereigns of Austria, not used, however, for the past 200 years. In the Apostelcher is the sarcophagus of Emperor Frederick III (died 1403), a very elaborate work in red and white marble surrounded by 32 coats of arms. In eight sections below are scenes from the history of Wiener Neustadt [a city south of Wien].

There is also in this church a triumphal arch of red marble erected in 1894 to commemorate the relief of Vienna from the Turkish besiegers in 1683. It is a fine work of art with numerous figures and reliefs in Carrara marble.

On the Stephaus platz, in front of the Equitable Insurance Building, is the Stock in Eisen, a stump of a tree full of nails driven by apprentices of the locksmith trade for good luck when they left the city to complete their knowledge of the trade in foreign countries. The stump is secured with an iron hoop and lock bearing the date of 1575.

I almost forgot to mention that the church was filled with girls in white dresses with a wreath in their hair and boys dressed in black who come to the church to receive the “Firming” or confirmation of their joining the Catholic Church, which ceremony is performed by the Archbishop. I read in the paper that, since Pentecost Sunday, 3000 children have received the “Firming” in this church. They drive up to the door in carriages decorated with flowers, which is a very pretty sight.

From here we went back by way of the Stadtpark, which is a favorite resort in summer and contains many statues and monuments of painters, composers and allegorical figures. We crossed the Wiener Fluss (river), which runs in a bed made of concrete and passed the Invalides Haus where Tante lives and home for dinner. 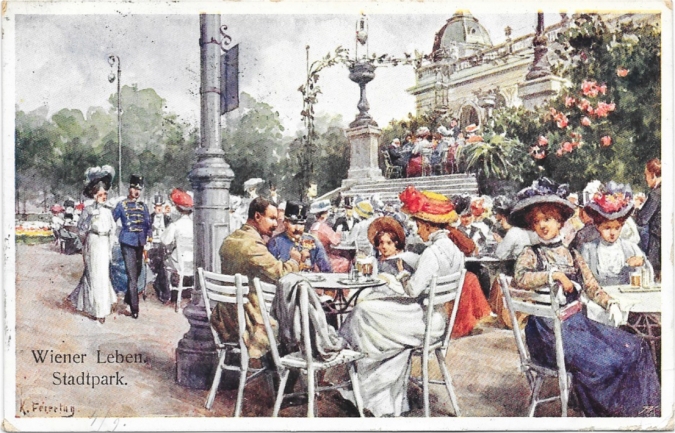 Life In Vienna, the City Park

In the afternoon Tante called with Mrs. Fritsch, the widow of Mama’s oldest cousin, Franz, and, together with Alfred Kinski, we took a car to Schoenbrunn and went into the Dreher Park, where we listened to a fine concert given by the Schubert bund, a society of about 200 men singers, directed by the well known composer Prof. Haus Wagner.

It was grand, in fact, the best Mannerchor which it has ever been my pleasure to hear. They took position in a covered open-air stage, and, in the garden, were seated thousands of men and women eating and drinking, but whenever a new number was announced everything was quiet. In between the songs, an orchestra lead by Johann Muller (another Vienna musical celebrity) dispersed beautiful music by well-known composers.

We left before the finish and came home at midnight.