Time flies and Wien certainly is the place to make you feel as if you would like to live there. Cousin (Mrs.) Fritsch called at 10 o’clock, and we took the car to the Ring Strasse.

This wonderful street is 185 feet wide and, together with the Quai, encircles the inner city. It was laid out in 1857, mainly on the site of the old ramparts. From the Aspern Bridge to the end of the Schotten Ring, it is two miles in length and is considered, architecturally, one of the finest streets in Europe.

I cannot possibly mention all the magnificent buildings which we saw on this grand street. The Imperial Opera House erected in 1861 in Renaissance style is one of them; it has seats for 2270 persons. The University is another; it is a vast quadrangular structure and cost three million dollars to build.

We next visited the “Votiv Kirche,” erected in 1856 to 1879 in memory of the present Emperor’s escape from assassination in 1853. The interior is lavishly enriched with gilding and painting and adorned with 78 stained glass windows. I regret that I did not have the time to study these beautiful windows, but there is too much to be seen in this wonderful city. The Rathaus, built in 1873, took ten years to build and cost five million dollars. It is enriched with statues and has a stately tower 320 feet high.

The windows and balconies are filled with pretty flowers. I also observed that many of the (electric) lampposts have baskets filled with flowers. The Mayor of the city is a great lover of flowers, and the city public buildings are adorned with them.

We took our Fruhschoppen at the Lowenbrau Restaurant and, after that, went to the Volksgarten. Here in a quiet spot surrounded by walls of evergreen and sitting on a Thronsessel is a beautiful statue of Empress Elizabeth, who was assassinated in Italy about eight years ago. She was a great favorite with the people. In another spot is the sitting figure of the poet Grillparzer, with scenes from his works in relief, also Sappho Medea, Hero and Leander, etc. The trees are in full bloom, the acacia is especially fragrant, and the birds are singing. I saw an old gentlemen feed an “Amsel”—she picked the crumbs from his fingers.

We now went to the Imperial Hofburg residence of the Austrian Princess since the 13th century. On the Burg Platz, we saw the bronze equestrian statues of Prinz Eugen and Archduke Charles, the former victor over the Turks and the latter over Napoleon. Passing through the Burgter, we entered the inner court and witnessed the changing of the guard, which is quite an imposing sight and is accompanied by military music.

We took our dinner at the Volksgarten Restaurant (name of Seidel). Car to Schonbrunn, the summer residence of the emperor. It has 1441 apartments. Napoleon had his residence here in 1805 and 1809, and his son, the duke of Reichstadt afterwards (1832), died in the room once occupied by his father. 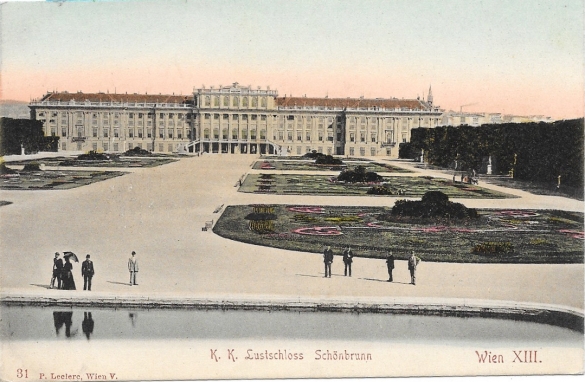 The extensive garden is laid out in the French style of the 18th century and is a wonderful sight. The large trees are trimmed in a manner to form immense green walls with arched passages and niches in which are 32 marble statues. Beautiful fountains and a colonnade called the Gloriette, which is situated on a hill 777 feet high, form a picture never to be forgotten.

To the left of the main avenue is an old Roman Ruin, an obelisque and the Schoene Brunnen (beautiful fountain), a large menagerie or zoo, and last, but not least, a large Palm House in which we spent some time.

As it began to rain, we took a car for home and spent the evening in the rooms of Tante Kinski who played the piano for us. She is a very accomplished player, and we enjoyed it immensely.

The Wiener life is very interesting, and we have had some funny experiences with car conductors, waiters, and flower girls (mostly 50 to 60 years old). We entered a car before it was coupled to the rear car, and do you know the motorman wouldn’t budge until we got out again. Then he moved the car about one foot to join it to the rear one, and we could then enter again. No standing or strap hanging inside of the car, only seven on the rear platform allowed to stand, etc.

Well, I must close, more next time. I stayed home this Monday (7th) morning to write this. We expect to stay until Friday a.m., as there is a big turn out of Emperor, Princes, nobility and church dignitaries on Thursday.

With much love from your dad.