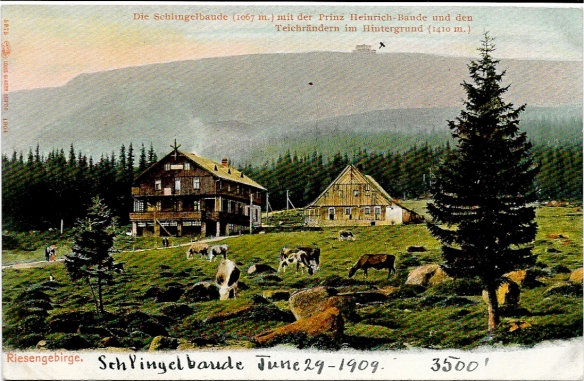 At 11 o’clock, the carriage called, and Joseph, Aennchen, Emily and I rode up to the Brod baude. These “Baude“ are similar to our block houses. In the large room, they have one of these immense tile stoves which sometimes has to be heated in summer, as it is cold up high when the sun is not shining.

The cattle are kept under the same roof, and above them the necessary feed for the long winter days. In this hayloft, the foot tourist finds a night’s lodging. The winter lasts eight months, and snow covers the ground sometimes as high as 9 to 15 and even 20 feet. It covers the windows of the houses, and sometimes it rises up to a gable of the roof, compelling the inhabitants to dig a tunnel from the door to the out houses.

In winter the roads are indicated by long poles which are driven into the ground in fall. If a strong wind is blowing, and the storm blows the snow in all directions, the inhabitants have to remain in the baude, sometimes for days.

But in summer, the Baude becomes the meeting place of the tourist and some of them have been turned into hotels or restaurants, and they have very cozy looking rooms fitted up with old style furniture, with the walls decorated and with very nice mottoes. 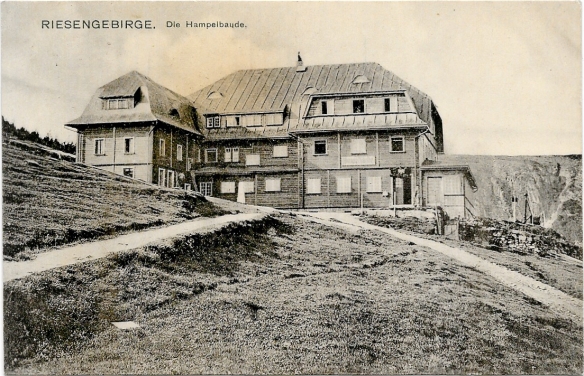 Here is one from the Hampel baude, which we reached after a climb of 2 hours and where we took our dinner:
“Erbaut wetterfesteb Mannen,
Aus alten sturmgefeiten Tanen,
Und Berggrabit mit Muh gespalten,
Nun hoff mit Gott ich Stand zu halten.”* 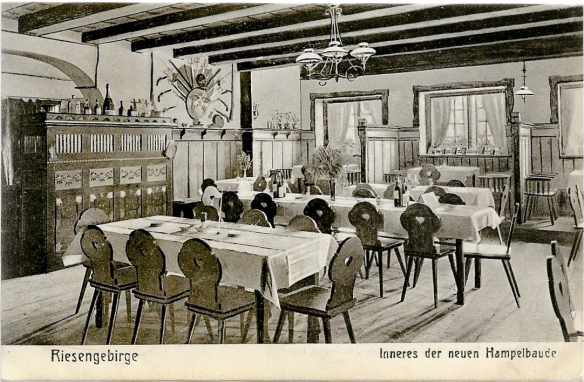 Riesengebirge. Inside the new Hampelbaude.

The owner of this Baude has a very pretty winter home in Krumhubel and is quite rich for it pays to entertain the summer tourists. All the eatables and drinkibles [sic] have to be carried up to the higher Baudes, and they charge 2 1/2¢ for a glass of water.

We had a fine dinner, and the girls started for Schneekoppe, which is 5,248 feet above the sea level, while our starting point, Arnsdorf, is only 1,415 feet, where the snow is still lying in some places 2 to 3 feet deep. I could not resist the temptation to snow ball with Joseph. 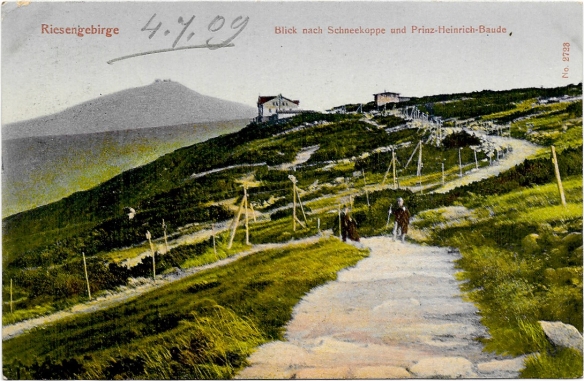 View of the Schneekoppe mountain and the Prince Heinrich Chalet.

We reached this place in an hour, and we had some very stiff climbing, but constantly such grand scenery that we did not notice the work. They are planting the dwarf pines in the empty places, although it may take 10 to 15 years before it is 3 feet high. The Germans have a law by which a new tree has to be planted for every one which is cut down or dies, and you see “Schlonungen“ or rather young plantations of pines and firs all along the mountains, i.e., a seed is put into the ground at regular distances, and the little tree is watched and nursed as it grows up until it gets to be five years old, when it begins to grow more rapidly. By the time it is 50 years old, it can be cut down and replaced by a new one and so on “Ad infinitum.” That’s what we will have to come to in the U.S.

After a short rest, we began our descent, and, let me tell you, it is harder on the legs than the ascent. A short distance down, we saw a monument erected to the founder of the “Riesengebirge Tourist Club” which has members all over Germany and whose object it is to make good roads over the mountains and to keep them good repair. The monument has been put together with rocks from all parts of Germany, where ever there is a club belonging to this society, and I saw among there a rock from New York Club, taken from the Hudson River.

There is a Big Lake here, within a basin surrounded by huge rocks, which looks as if it had been made by man. A descent of 1,100 feet brought us to the Schlingelbaude at 5:15, and, about half an hour later, the girls joined us, and we descended to the Brodbaude where Josef‘s coach awaited us and took us to Krumhubel. Here we met the entire family, they having walked 3/4 hour to meet us, and Josef and I footed it home.

*Editor’s note: If anyone can more accurately translate this, please share. Given the resources of the internet, this is the best I could do (Muh completely defeated me).
“Built in weather by good men,
From old storm fallen firs
And mountain granite split with Muh,
Now with God I hope it stands.” 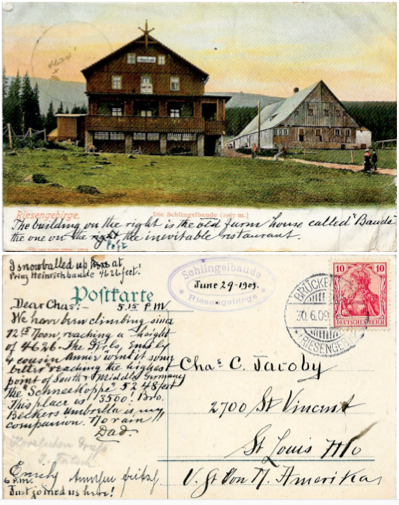