Shopping and bought a steamer trunk as we cannot possibly pack our things into the four suit cases. I am glad that the matter has been settled. I forgot to mention that we visited the Dom (Cathedral) the other day.

This Romanesque edifice was begun in the 11th century and greatly altered in the 13th. The whole of the exterior was restored in 1888 to 1898, and a tower was added a year later. The interior was painted in 1899, and the windows are all modem and represent in succession the fall of Adam to the appearance of Christ and, opposite to this, the Life of Christ from his birth to the death on the Cross.

In the upper windows are the seven Beatitudes and, in the center, the “Sermon on the Mount.” Opposite to these, are the twelve Apostles and the four prophets. In the windows of the Choir and the transept are representations of the teachings and development of the church up to the Reformation.

The large triple window in the West wall of the Choir is an old one, it has been renovated and represents the pentacost. The lower windows had to be held very light, which takes away a good part of their effectiveness. They have been furnished by several firms, among them Zettler and also Mayer of Munchen, Prf. Lunnemann in Frankfort a/M, and one by K.G. Rohde of Bremen. The one representing the birth of Christ by Mayer of Munchen is considered one of the best.

The Dome contains some very fine reliefs dating from 1500 and a beautiful rococo pulpit represented by Queen Christina and Sweden in 1654, also a bronze Font of the 12th century.

The bronze doors representing scenes from the old and new testament are especially fine, and the Gold Mosaic shows them representing the “Bearing of the Cross: and the “Crucifixion” executed by Venezia Murana Co. are as fine as I have seen them.

We also paid a visit to the Bleikeller (i.e., Lead cellar where the lead for the roof was melted) which had the property of turning corpses placed there in into mummies. The oldest corpse is that of a roofer who fell from the building 460 years ago; others were placed 260, 200, and 170 years ago. There is also a sarcophagus (1730) containing the body of a Chancellor which cannot be opened for examination as some of the relatives are still living.

We visited the old Kramerant haus (now called Gewerbehaus) and gained admission to the hall in which Father in Nov. 1849 preached his first sermon in Germany. I know from Mother that the hall was so crowded that a way had to be forced for him to the platform by policemen.

In the hall there are life sized portraits of Bremer Ratsherren and Burgmeister (councillors, mayor). On the wall of the staircase are frescoes representing the life of a mechanic from the cradles to the foundation of a family.

In the hall itself, 26 representations of the history and achievements of man, as shown from the primitive state to the present time of steam, and the other inventions. Dinner at the hotel, where they set a fine table of four courses for 50 cents a person.

We took a carriage ride in the afternoon to the Freihafen, thence through the Langestrasse with its quaint old houses. “The Kornhaus,” erected in 1591, which on account of its architectural beauty, as well as on account of its history, may be called one of the most important old buildings of Bremen.

The inscription Rolandt Hat Diese Kornscheuren, An Statt der Alten Stadtmauren, Lassen an Diesen Ort Bauwenn, etc., explains the purpose of the building to be the storing of wheat in order that the citizens might have food in case of a famine.

“The Essighaus,” erected in 1618, probably according to plans of the architect of the old Rathaus Luder von Bentheim and renovated in 1895, shows in its exterior, as well as in the interior, the true picture of a home of an old Bremen Patrician of the 17th century, including the old merchandise floor where, in week days, the merchandise was stored to be hoisted to the higher floors and which was cleared on Saturday to serve as a reception room of the family. To the right the Hantohr (offices). In the center of the house. the kitchen with its old Dutch tiling.

Between kitchen and office, the staircase leads upstairs. Above the kitchen is the bed chamber which has no window to the outside so that it could retain the warmth received from the kitchen, and that the merchant might not be disturbed in his slumbers by the elements, as the storm would remind him of his many ships crossing the ocean uncovered by insurance.

In front is the dwelling room, with pretty bay windows for the ladies, in the rear, up a few steps, the rear room where the merchant, his family and help took their meals. In the next story the large Patrician Hall for festivals, etc. It’s a treat to go through a house like this. But no bathroom, and so I guess you prefer the home on Shenandoah.

The house was bought by a wine merchant and is now used as a first class wine room restaurant. The old Stadt Wage (city scake [sic]) is a rather fine old building erected in 1587.

From here, past the new Kaiserbrucke to the Hohe Strasse, where Father lived in 1850 and where I was born and through the Tiefer across the Grosse Weser Brucke, past the Theerhof, a strip of land separating the Grosse Weser from the Kleine Weser, on which Old Bremen is represented by old warehouses, unchanged, just as of old, and across the Kleine Weserbrucke into the Neusradt. 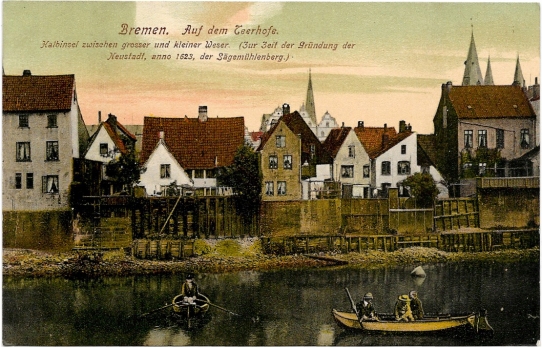 Bremen. On the Teerhofe [which is a peninsula between large and small Weser].
(Called the sawmill mountain when Neustadt was founded, anno 1623).

Thence across a new bridge to the Gaterteich, a promenade along the river, which afforded us a fine view of distant woods, meadows and life on the river. Children wading and playing in the sand; grown people bathing and taking sun baths, sailing boats and steamers and, on the other side of the promenade, beautiful homes with a glass veranda and a flower garden in front of each one.

At the Weserlust, a garden restaurant, we turned citywards with a view of Hastedt in the distance, where once upon a time we had our printing office and bindery, and where I lived for sometime. Along the Hamburger and Osterthorsteinweg through the Ostertor which really still has a (guard) Wache, and past the Kunsthalle, containing pictures by old and modern masters and back to the hotel.