Goodbye Bremen!! At the depot, we had quite a “farewell crowd,” with candy and flowers. Armine, Paul, Hanna, and Mrs. Gärtner. 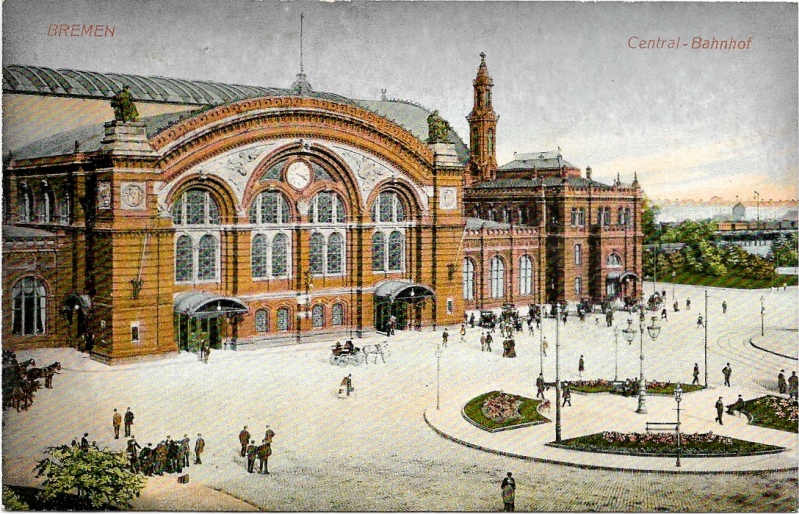 After a pleasant trip, we arrived in Cologne at three o’clock, and went sightseeing in a cab. Of this more in my next.

We leave in the morning for our trip up the Rhine, and it is now 11 o’clock, and time to to go to bed.

With much love,
Your Dad.

I do not remember exactly where I stopped last, but we left accompanied by Armine and Paul, Mrs. Gartner and Hanna Burkhardt, all of whom brought flowers for Mama. We arrived at Cologne about three o’clock and found the hotel, “Die Kwige Lampe,” right near the depot and next to an old church, old but neat and clean, and, after washing up, we took a cab and rode around rubber necking.

I did not go to the Dom at once, as I always prefer to leave the best for last, so we drove to the St. Gereon church first, which is dedicated to the old martyrs of the Theban legion with their Captain, Gereon, who according to the legend, perished here in the year 286, during the persecution of the Christians under Diocletian.

The building is of a very peculiar style. The long Romanesque choir is adjoined by a decagonal nave in the Gothic style, with a quadrangular vestibule. The nave part of it was erected first by the Empress Helena. Archbishop Anne added the choir part in 1042. In the vestibule is a very fine piece of sculpture, a “Pieta,” by J. Raiss.

The interior presents an imposing appearance. In small chapels in the recess of the nave are stone sarcophagi of the martyrs, half-built into the walls. Their skulls are arranged under gilded arabesques along the sides of the choir. Fine carved wood choir stalls. The sacristy, in the purest gothic style dating from 1316, has especially fine gothic stained glass windows.

In the gardens of the Kaiser Wilhelm Ring (a promenade running around the interior of the city, similar to the one in Wien), we saw a nice monument of the Empress Augusta, and a colossal bronze Equestrian statue of Emperor Wilhelm 1st, 36 feet high. On a red granite base are seated figures of Father Rhine and Colonia. 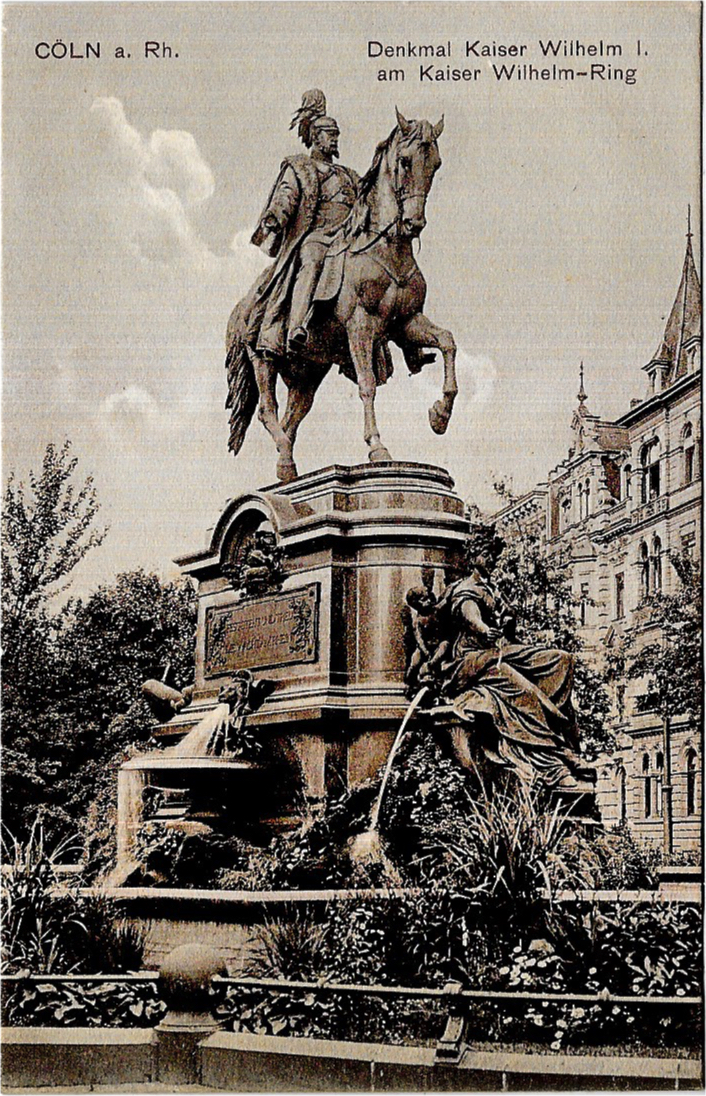 Monument to Kaiser Wilhelm I, in the Kaiser-Wilhelm Ring.

We passed the Kunstgewerbe [Applied Art] Museum, which we intend to visit tomorrow, also the Handels Schule, a fine building. The Eigelstein Tor, or gate, is in the northern fortified tower of the old entrenchments and has been restored. We drove past it to the Zee, and near this we saw the American Garden, a place fixed up similar to our Delmar Garden, with a Shoot-the­-Shoots, Scenic Railway, and all the other nonsense of that place.

The Flora Garden, with a winter garden, concert room, Victoria Regia house and Aquarium is laid out in great style. We passed it and drove to the Rhine Promenade, past a massive base upon which stands a bronze Equestrian Statue of Frederick the 3rd, but, dear me, there are so many statues of the emperors and statesmen, poets and other celebrated men, that one finally becomes tired of them, and, although everyone of them is a work of art, you begin to feel as if you had seen about enough of them.

Near the north end of the promenade, or rather the Kaiser Friederich as it is called, is the Church of St. Cunibert, an excellent example of the transition style consecrated by Archbishop Conrad in 1248.

The interior contains fine stained glass of the thirteenth century and structures of the 14th and 15 century. An interesting sight for us was the Bridge of Boates, a section of which is removed when ships are to pass through.

We passed along an old street, called Am Malzbuchel to the Heumarkt, one of the largest squares in town. Here rises the monument of Frederick William III, erected in 1878 to commemorate the liberation of the Rhonish provinces from French domination, and their union with Prussia to the rank of a first class power, Blücher, Stein Arndt, Humboldt, etc.

Back into the heart of the old town, with its narrow streets, where people have to walk in the street as only one of two can walk abreast of each other on the sidewalk, and past the old Gürzenich which we intend to visit tomorrow, and the very old church St. Maria, in Capitol, consecrated in 1049 by Pope Leo the 9th. Unfortunately, it was closed and we could not see the interior.

We stopped for refreshments at the Pachorr Bräu, so familiar to us from our München days and along the Hoch Strasse, the busiest street in Cologne, to the Laurenz Platz, which has a bronze statue of Field Marshal Moltke and the old Rathaus, the St. Columba church and the Jewish Synagogue to the Apostles Church, a remarkably handsome basilica with aisles and double transepts. The oldest part of this church dates from the 11th century. The dome, the choir and the transepts are magnificently adorned with mosaic, on a gold ground executed in 1895. The windows are very fine, too.

When the plague raged at Cologne, in 1357, the wife of a Knight von Aducht was attacked by the malady, and, having fallen in a death-like swoon, was interred in this church. Awakening from her trance, she returned home to her husband, who thought that he beheld an apparition, and declared that he would sooner believe that his horses could ascend to the loft of his house than that his wife could really be alive. Scarcely had he uttered these words, says the legend, than the horses’ hoofs were heard ascending the stairs, and their heads were seen looking out of a window in the upper story of the house. And there they are to this day, I saw them myself, that is, in stone. They are said to have been placed there in commemoration of the miraculous event, but they more probably formed part of the armorial bearings of the man who built the house.

Another one of the old gates, the Hahnen Tor, is a massive structure of the 13th century, with two towers.

We had supper in a garden of the hotel, which is between the hotel and the old church. 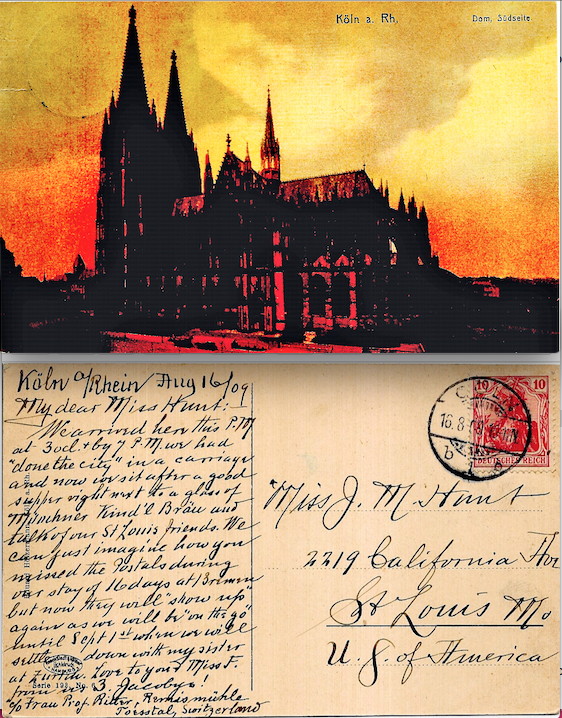 Cologne on the Rhine.
Cathedral, south side.