I am so anxious to see my old college that we concluded to go to Ludwigsburg this morning. We reached it in 1/2 hour by rail and went to the hotel where I found a letter from Armine in which she informed me that she has sent three more in care of the German Preacher Rev. Reber, so we walked to his home.

The old town, which has a garrison of some 6000 men, looked awful quiet to me. It was founded in 1700 as a rival of Stuttgart, but it “Never got there.” What it can boast of are the magnificent avenues of limes and chestnuts leading from the palace to the Salonwald, adjacent to which is our old college, the Salon.

With a peculiar feeling, I ascended the steps of the old “Waldhorn,” an old hotel where the meetings of the Methodists were held when I was here 44 years ago and where they are still being held. I found the preacher at home, and he showed me the old Chapel.

From here we walked out to the Salon, which is now converted into a Home for Old Men. I spoke to one of them who was just wheeling himself out of the gate, and he proved to be a chef (head cook), “Name of Hess,” who had been with the North German Lloyd for many years and also at prominent hotels and restaurants in Connecticut and New York. Of course, he was delighted to meet people from America and to have a chance to talk English, and he volunteered to take us all over the grounds.

The old building with the chapel is still standing, but changed to suit its new destination, so I concluded not to look in. The grounds have been changed entirely, and I could not recognize them. He tells me that the old students and teachers meet at Pentacost every two years, and that they met in 1908.

Greetings from the Salon at Ludwigsburg.

The old rotunda is still there, but the splendid view has been obstructed by trees, houses and bushes. The “Grune Bettlade,” another old land mark, is still there, and so are the old giant chestnut trees, the leaves of which served us as tobacco when I was a boy. 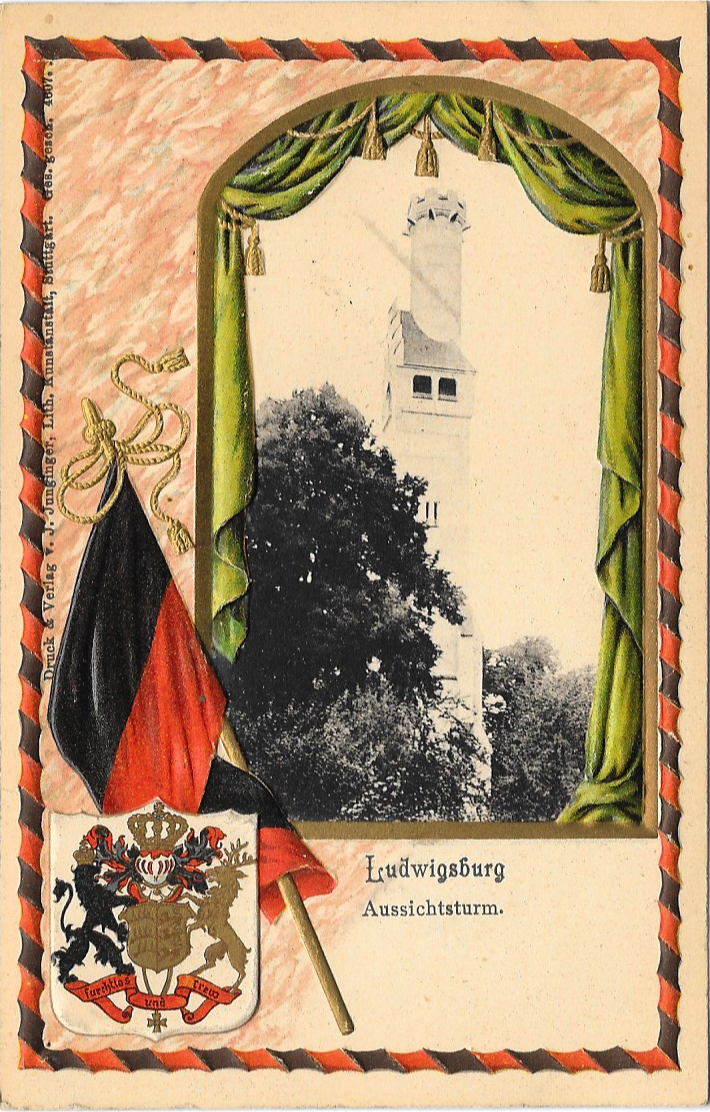 We could see Kornwestheim in the distance, at my time, one of those pretty little Swabian villages in which every farmer has a big manure pile in front of his house, but now, alas, it has been degraded to a factory town.

The beautiful view to the Solitude, so prettily situated on the spur of a plateau and formerly the seat of the Karlschule, where the great German poet Schiller received part of his education, has been spoilt by the houses built on our former play ground, and I could not enjoy it. For the first time since I put my foot on the soil on which my cradle stood, I felt disappointed.

Mr. Hess wheeled along through the beautiful Salonwald to a Gasthaus just inside of the old Stuttgart Tor, near which I fought my first and only initiation duel as a boy. No change in the old gate, or in the old tavern, and we certainly enjoyed sitting in the dingy little Honorations Stube (room of the guests of honor) and eating a lunch and drinking a wine which was bottled in 1886 (in consequence of its age, it disagreed with me).

We parted from our companion and walked along the streets, watching the soldiers drill and wondering how any one could stand it for any length of time in such a dead town.

Home in time for supper and to bed. 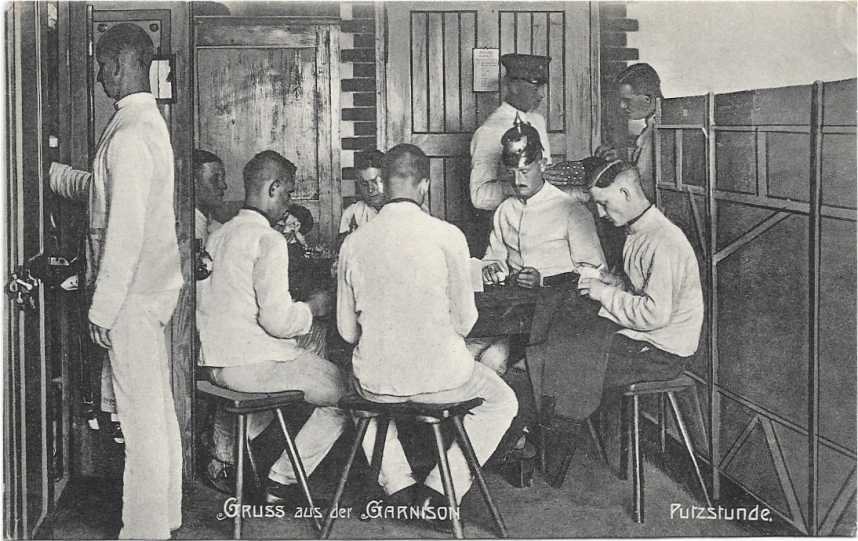 Greetings from the garrison. After hours[?]