Again we had to arise early, and we did not regret it, for we had another fine day and a good view of the Matterhorn. Our descent to Visp was much brighter than our ascent.

We had the Matterhorn behind us in full view for quite a while and, after that, all the way down to Visp, the Weisshorn would loom up again and again on the horizon wit the sun shining brightly on its snow covered top.

We had no difficulty in securing a good seat in a brand new car, 3d class, and we had good company all the way to Montreux. The train carried us along the Rhone River, with large bare mountains in full view on each side of us. Now and then, an old chateau or fortress perched high up on the mountain and, below it, a village.

We could tell by the signs on the R. R. Station, and by the language of the people surrounding us, that we had come into the part of Switzerland called the French Switzerland. Mt. Sion (German Sitten), the capital of Canton Valais, which formed the Department Du Simplon in 1810 to 1815, had some kind of a festival, and the houses were all decorated with Japanese lanterns and buntings.

Near Martigny, the wide Rhone Valley is enclosed by lofty mountain chains whose lower slopes are covered in vineyards. Between this city, which was known at the Roman time, and St. Maurice, we saw a beautiful cascade, the Pissevache, which falls into the Rhone Valley from a height of 215 feet.

At St. Maurice, another very old town, we saw the abbey which is said to be the most ancient on this side of the Alps, founded at the end of the 4th century by St. Theodore and still occupied by Augustine canons. The Dents du Midi, 10,897 feet high, from the summit of which Mont Blanc and the Alps of the Valaist and Beru can be seen, now came into full view and stayed with us all the way.

[Literally]: Teeth of the South”
[Chablais Alps in the Swiss canton of Valais.]

Shortly after leaving Villeneuve, the Lake of Geneve came into view, and we rode along side of it until we reached Montreux.

At Chillon, one of the suburbs of M., we had a good view of the Castle of Chillon, which stands on an isolated rock some 60 feet from the bank with which it is connected by a bridge. It is more than a thousand years old and was, at one time, the residence of the Counts of Savoy. Byron has reference to this old castle in his poem, “The Prisoner of Chillon.”

We arrived at Montreux at 1 o’clock and found good quarters in the hotel De la Gare where we enjoyed a good lunch, after which we walked down the Kursaal Strasse, which is lined with stores. The ladies on the streets were dressed in a decidedly French style.

We took an incline railway to Les Planches, another suburb of M., and sat down on the shady terrace in the rear of the quaint old Parish Church of M., from where we enjoyed a fine view of the city, the lake and the mountains. It reminded us of Naples, condensed.

Some 7 or ten villages lying scattered about, partly on the lake and partly on the hillside are collectively call Montreux. It is a favorite resort for the French and English tourists and, at the end of September, many came here to use the Grape Cure, while others, with delicate lungs, make their residence here in winter.

There is a fine Kursaal with a garden and a beautiful English Church. Returning from on high, we went to the lake and watched the sea gulls of which there are hundreds flying quite close to the shore. It is amusing to see how they snatch a piece of bread thrown to them in mid air, and one man amused himself and his little girl using up a large loaf of bread in feeding these pretty, graceful birds.

On the shores of Lake Geneva—the seagulls.

A good supper and to bed. Another beautiful day, long to be remembered. Our vacation will soon be over but we certainly are winding up with the best part of it here in Switzerland. 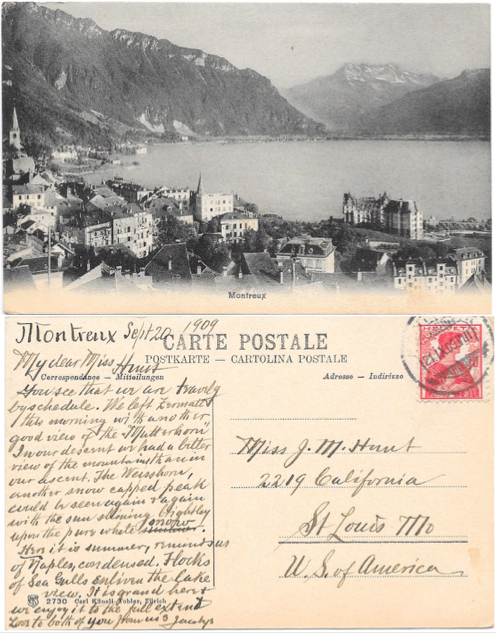