We are home again and glad of it, too. We left St. Moritz this morning early. We had to get up at quarter to 5, as our train left at 6 o’clock. We did not like this very much especially as it was raining.

Our route took us partly over the ground covered in coming here [illegible] as far as Filisur from where we took the new railroad, through the Landwasser Valley to Davos, a health resort filled with big hotels. The waiting room of the station smelled of disinfectants, and we did not stay in it but took a walk up the street to buy some fruit. We had to wait an hour for our train and we were glad when it came in sight.

We could not see much of the scenery, but what we saw kept us busy. We passed through the Pratigan (meadow valley), a long narrow valley with fine pastures and nice orchards and watered by the mountain river, Landquart. We passed through a country with which Alfred was very familiar as he had made a foot tour through it not long ago, and so we could learn from him the names of the different peaks as they came into view now and then.

At Klosters, a pleasant looking village in a broad valley enclosed by lofty mountains, the train reversed its direction, and we kept on, descending rapidly, crossing ravines with waterfalls, with a view occasionally of the valley, and then again passing through a grand rocky and wooded gorge following the river in tis course.

At Fidervis, I saw the prettiest station which I have ever seen anywhere, and we regretted that we did not have time enough to take a picture of it. It is built in the Swiss style, and, on the lower balcony, it has a sort of heavy moss growing on and hanging over the low balustrade. In the rear of this green border is a profusion of flowers varied in coloring, interwoven by the Virginia Creeper with its autumn coloring. Underneath this, on a trellis and around the supporting columns of the balcony, vines and flowers are intertwined forming a pretty curtain. All the stations [illegible] on this line are built like Swiss chalets, and each one differs in the arrangement of the flowers and vines.

Schivers, a pretty village near Landquart, has a little history of its own. In 1622, the villages successfully defended the churchyard against the Austrians and, as the women contributed to the victory, they have since enjoyed the privilege of first receiving the sacrament.

We passed the ruins of several old castles and, entering the Klaus, a narrow gorge at the entrance of the Pratigan, we wound our way along the river and emerged upon a plain in which is situated the village of Landquart, where we had to change trains. We enjoyed a plate of soup at the station hotel and, after an hour’s wait, we continued our journey. 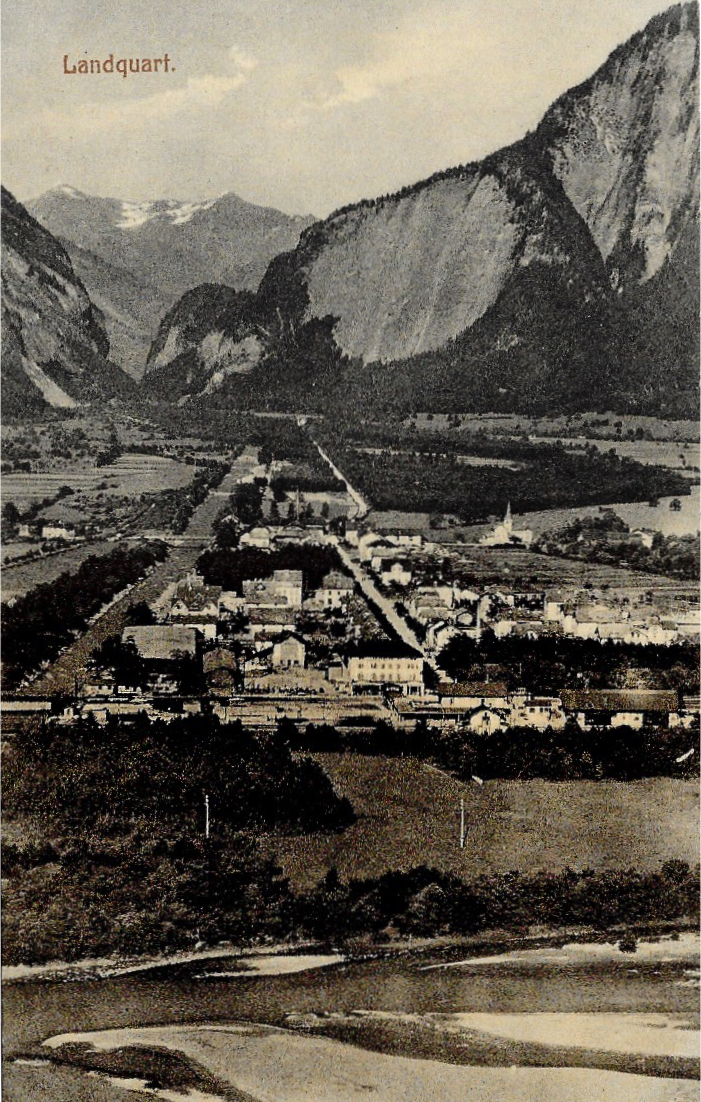 At Sargans, we saw a very pretty restored chateau on the outside of which are the Coat of Arms of the original 7 Cantons, as they were united in the 16th century. There are 22 of them now and, in this, the history of this little Republic is similar to ours.

By this time, the train became rather crowded for a good deal of the country folks were going to Zurich to see the balloons fly. They have a balloon exhibition at Zurich lasting three days, but I am afraid there will be no ascension today as it continues pouring down. We passed along the Wallensee, which is about 10 miles long and not much over a mile wide and has, on its north bank, immense steep rocks 2 to 3 thousand feet high, and only two little hamlets have found a site on this side of the lake.

On our side, too, the rocks are very precipitous at places, and we passed through 9 tunnels before we reached Weesen, the end of the lake. As we passed through these tunnels, we would, between them, obtain glimpses of the lake and the waterfalls on the opposite steep bank.

Crossing the river, we came to the Zuricher See at Lachen, a considerable village with a pretty church in the Rococo style and, winding our way along this lake, passing through vineyards and orchards, we reached Zurich at 5 o’clock. At the station there was a big crowd, and Alfred and I hurried through it to do some shopping before our train started for Remismuhle and home.

The girls awaited us at the Waiting Room and, together, we stood in the crowd for 10 or 15 minutes, waiting for the chain to be lowered, and when this came down at last, we rushed with the mob and secured a good seat together. Alfred stayed at Zurich to spend the Sunday with friends.

At Winterthur, we had to change cars again, and, at last, we reached home. Emily carrying the Rucksack on her back in true tourist style, and Daddy grunting and growling, wishing for a dry spot. Of course, the folks at home, Mama and Tante Lenchen, were astonished to see us. A cup of tea was quickly prepared and, surrounding the pleasant tea table, we related our adventures.