Our train for Basel left at 11 o’clock, and we felt pretty bad to know that we had to say good bye to Tante Lenchen. She has been such a comfort to us during the past month. As we ran in and out of her home, making our excursions into Switzerland, we always felt that we were welcome and that her only regret was that she could not offer us a home such as she had when Uncle Wilhelm was still alive.

We spent many a pleasant hour together, and we all have been brought closer to each other. Surely it is hard to part from those you love and the question always arises “When will we meet again?” Will we meet again here on earth? Thanks be to God our father that we know we will meet again in the life to come.

Just after taking leave, and while we waited for the train to start and carry us off, Miss Gertie Knecht, the intimate friend of Tante Lenchen, came to meet her, and I know she helped her over the first grief of saying farewell, which I thought very sweet and considerate of Miss Gertie.

We landed in Basel at 1:15 P.M. and parted from Alfred at the depot and went to the Schweizerhof Hotel. Emily has torn the nail on the big toe of her foot, and so she stayed at home to nurse it while I went sight seeing by “My lonely.”

I took the electric down town and went in the Cloisters of the Münster. In front of these, stands quite an ancient statue of Johannes Cecolampadius, the Reformer. If I had a name like that, I believe the good citizens of St. Louis would erect a statue to my memory just on account of the name.

[from back]
Basel. Johannes Oecolampadius.

The cloisters are very pretty, and the walls are covered with Memorial slabs of old Basel families who were buried here up to 1850. Walking through them and stepping out of a side door, I entered a terrace called the Pfalz, which is some 60 feet above the Rhine. It is planted with chestnuts and afforded me a fine view of the [illegible] river with its bridges and the hills of the Black Forest.

I then went around the old church and admired its architecture. It is a very picturesque edifice built of red sandstone and has a brilliantly colored roof and two pretty slender towers. The inside is very imposing. It has some very good modern stained glass windows and a fine font (1465) and many old monuments. There is also a very old relief with the martyrdom of Saint Vincent. On the outside are some fine old sculptures, among them one of St. George (very old) and Saint Martin.

[from back]
Basel. Knight St. George and Monster.

In looking up the [Basel] museum, I had a chance to lose myself in some of the narrow and crooked street to this old town, and I was impressed with the aristocratic and “buttoned up and locked” appearance of the old residences. Also with the quiet and loneliness of this of the streets and places in this vicinity—either everybody was asleep or else they had died. 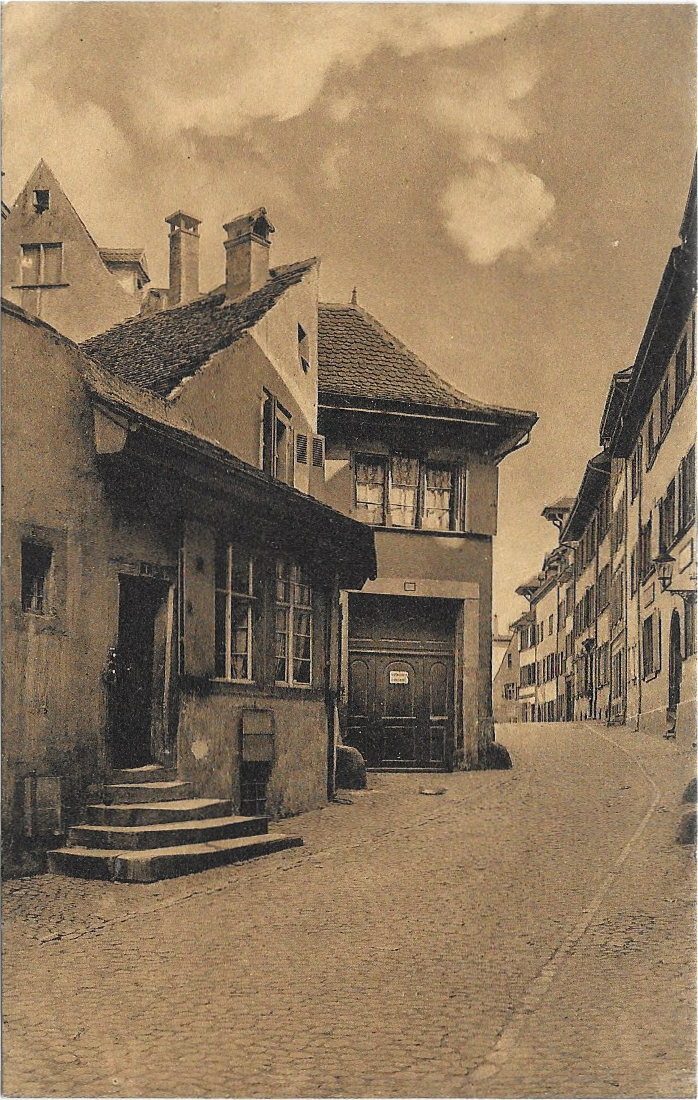 [from back]
Old Basel, upper Heuberg

The museum itself is located in one of those dead streets, and, if it had not been for a little sign on the door, I would have passed it. I had to knock for admission, and I do not think that there were more than a dozen visitors inside. But it contains a fine, if small, collection of pictures, among which some paintings and drawings by Hans Holbein the Younger, who lived here for about 15 years, and Arnold Boecklin a native of Basel. Right on the staircase, I had occasion to admire the frescoes by Boecklin, representing Gaea, Flora and Apollo, also three medallions of heads, representing the different kinds of critics.

The Ernest Stuckelberg rooms had some very fine works of art by this, another Basel painter. From here I went to the Markt Platz and saw the old Rathaus erected in 1508, but thoroughly restored a few years ago. 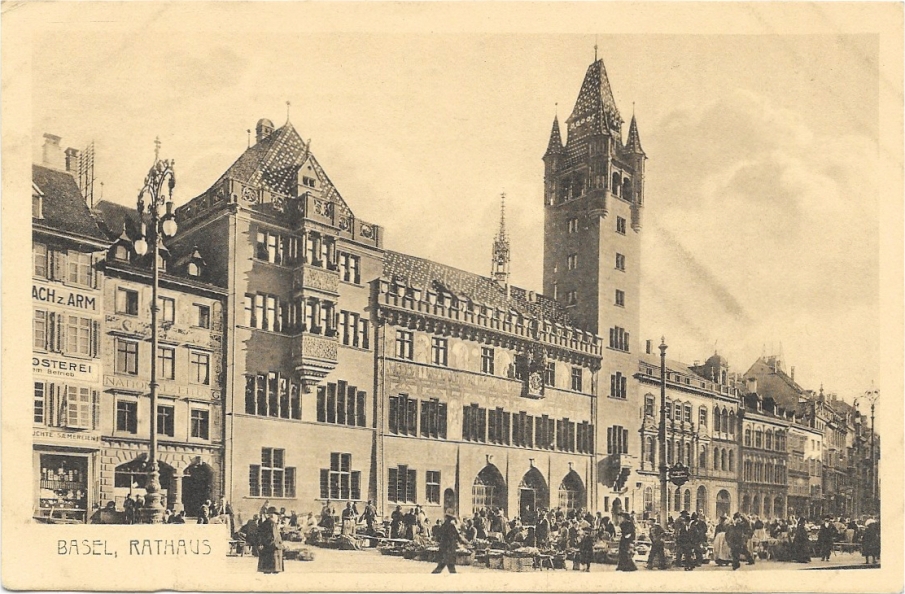 I regretted that our time did not allow me to see more of this very interesting old city.

[from back]
Old Basel, Tower of St. Alban