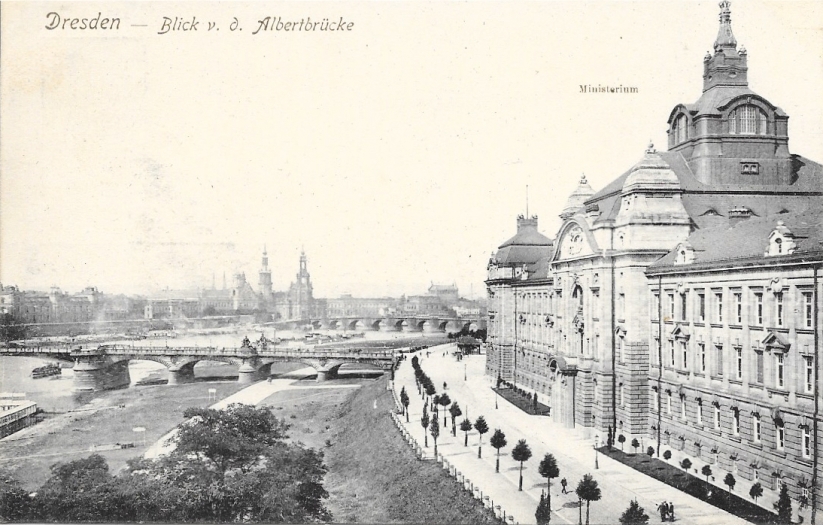 Dresden. View of Albert Bridge. Ministry [Department of the Interior].

Rain, rain, but we ventured out anyhow. We went to the Katholic Hof Kirche, which is connected with the palace by a passage. The population of Sachsen is Protestant and the reigning house, Catholic, but they do not seem to spend much money on churches for, although this is an immense building with many statues on the outside, it is bare looking inside.

The Protestant Krenz Kirche, which was burned down in 1897 and restored in 1900, has a very fine interior but proved to me a disappointment as far as the windows are concerned. They are a departure from the Munich style and seem to be an attempt to produce something like our drapery windows, but they are very flat, and some faces are dark and poor in their execution. Unfortunately, I could not get admission to the gallery to get a closer view of them. The wood carving of pulpit, pews, altar, etc., is especially fine.

In the rain, we took a drive to the “Grosse Garten,” and the girls went into the Lustschloss, a chateau built in 1680 where the Museum of the Saxon Antiquarian Society is now established.

Our dinner we took at the “Drei Raben,” which suits us almost as well as the Rath haus Keller in Munchen.

We bought a tie with the American flag for Emily and a ‘kerchief for me and beau for Mama, all with Old Glory.

Our supper we took in the Royal Belvedere Restaurant on the Bruhls Terrace where we listened to a fine concert by the best string band of Dresden under the leadership of Kapellmeister Olsen. It is the best we have heard and mama was carried away by it. As an encore, they gave “Das Meer Erglanzte in Abendschein,” [The Sea Shone in Evening Light] one of the songs I formerly sang, and it just touched our hearts.

Editor’s note: Much to my sorrow, I cannot find the lyrics for Hermann’s song. I also cannot determine what a “beau” might be—especially one with Old Glory printed on it.