I spent a good part of the morning writing and, after a hurried lunch, I met Hortense at the station, and together we took a train for Homburg vor der Hoeh, a town of some 15,000 inhabitants near the Tannus Mountain, which was the residence of the Landgraf of Hesse Homburg from 1622 to 1866 and is one of the most popular watering places in the Rhineland.

At the station I saw a nice art glass window made by Luthi and of which Mr. Witthun had shown me the sketch. This gold purple and black on clear cathedral, which is used a good deal by the Germans, makes a rich effect and gives good light at the same time.

As it rained, we concluded not to walk to Friedrichsdorf but took a cab and rode to the new Erloeser Kirche built by Emperor Wilhelm, who frequently comes here. It is a beautiful structure with very peculiar windows of nearly all black on clear cathedral. The mosaic work on the walls is very good, and fine effects are produced by a combination of electric light and glass.

A very nice cross for the altar, a present of the Emperor, and a nice pulpit bible given by the Empress were shown us. We continued our drive in a pouring rain and reached Friedrichsdorf about 3 o’clock.

This little village was founded by the Huguenots in 1687, and Lenchen and Dorette went to a French School here in 1865–66. They still speak French there. Our first call was on Tante Dortchen Fouquart, an old friend of Papa’s and one on whom I had called in 1866. She and her factotum, Bettchen, welcomed us and send their love to Uncle John, Lenchen, Dorette and Richen. We all remember the large wheel, which was turned by a big dog and set in motion the machinery for making noodles.

She lives in the old house upstairs, and we had to climb the same old narrow steps which have been there for generations. Down stairs we saw her son, Charles Foucard, and his wife Alice, who is the daughter of Jean Achard and his wife, Tante Charlotte. We called on Louis and Clement Achard (the sons of Uncle Louis), who own a large factory for making the celebrated Friedrichsdorfer “Zwieback” which is shipped by them into all parts of the world. They inquired especially after John and Hermann Achard.

We were shown over the factory and enjoyed a short chat at the office and returned to Charles Foucard’s, who, by the way, still runs the same little store which was kept by his mother before him.

Here we took supper and then went upstairs to Tante Dortchen, who presented me with an old picture of Father, one of Uncle Nulsen and one of Bishop Janes, which I will bring along with me.

We returned by rail to Frankfurt and found Charles Schwarz waiting for us. Together with him we went to the Allemania and enjoyed a good supper. 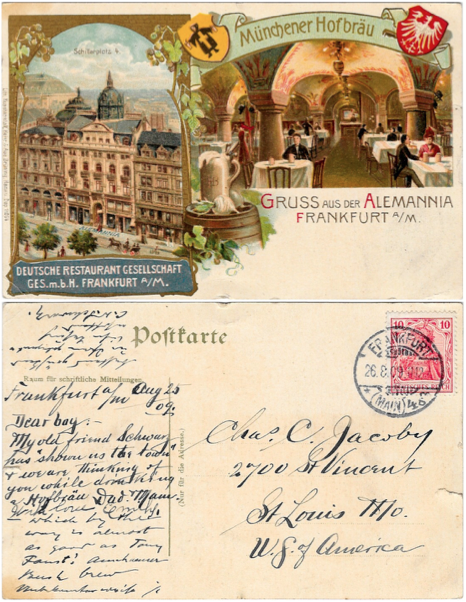