This has been a glorious day. Last night we heard it rain, and, when we awoke this morning, we looked out upon a perfect blue sky without a cloud in it, and, at our feet, was reflected in a clear lake the surface of which was perfectly smooth.

We decided to ascend the San Salvatore by a cabled Railway so we took a car to Paradiso and were pulled up some 2100 feet. It took half an hour before we reached the summit on which there is a pilgrimage chapel, and I must say that the Catholics make it a pretty hard job for a good churchman to go to church when it takes him two hours climbing to get there.

We thoroughly enjoyed the view—the lake of Lugano, the mountain and their wooded slopes and the beautiful villas and gardens above Lugano. Away in the west, we could plainly see the grand snow covered Monte Rosa chain and a piece of the Matterhorn and other Valaisian Alps. Mountains all around, it was a grand panorama. 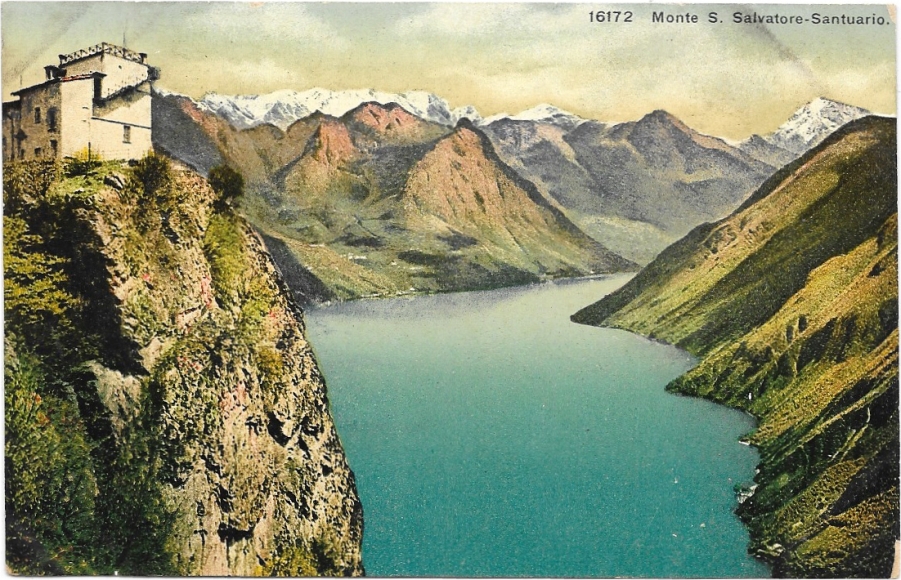 In the afternoon we took a steamboat ride on the lake to Ponte Tresa. The weather was fine, and we enjoyed the beautiful scenery which surrounded us all the way. We had a good view of the San Salvatore, which we had ascended in the morning and also of the pretty little towns which we touch on our way going and coming.

At Melide, I admired a fine old church which is surrounded by a cemetery in which there are some fine monuments and chapels, also Morcote, with its arcaded houses, and picturesquely overlooked by the lofty church of Madonna del Sasso and a ruined castle.

In the evening, we took a stroll though the streets of Lugano, which are very Italian in character, but clean. A broad Quay extends along the lake. In the interior of the town, we had a chance to admire the old houses with their arcades, the workshops and stores in the open air and all the Italian characteristics.

By chance we stepped into a church where we attended a service and listened to the sweet singing of children. At the same time, we admired the fresco of the “Passio” by Bernardino Luini, painted in 1529, also the “Last Supper” by the same artist, both were interesting.